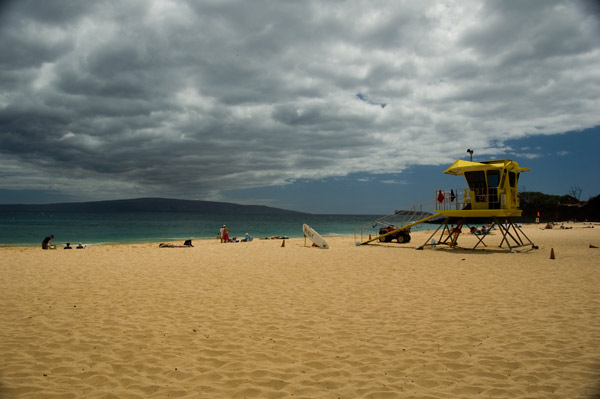 Yesterday we arrived at Maui. A flight from just a half hour tops brought us to the surf Mekka known for its beautiful beaches en mighty waves. Driving to our stay on this island we understood why. There are cars and busses with boards on top of them driving everywhere! The weather is terrific (Big Island was quite cloudy from time to time because of the active vulcano) an the vibe here is just what we want. No pressure what so ever.

We’re staying in Lahaina in the Outrigger Aina Nalu, a great resort with small studio’s. Lahiana itself is a small town known for the great weather and great amount of art galleries. Although you don’t wanna hangout in galleries during your holiday, the ones we’ve seen here so far are quite cool.

We’ve been to the gallery of Thomas Barbey. A guy who makes photomanipulations. What he does would be very nice already if he would make it with modern tools like photoshop, but what we understood is that this guy makes hist photo’s with old films and manipulates his work in the darkroom. With this in mind his work becomes even better!

Today we’re gonna check out some more beaches here, not doing too much. We don’t wanna rush anything 🙂 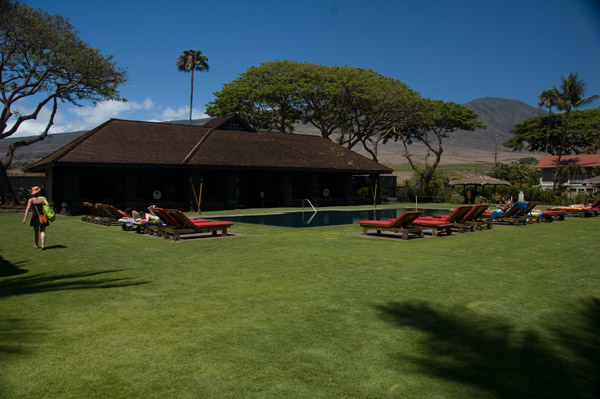 Second day, june third: Big Beach
Just another beach day. We drove to Maui’s Big Beach on the Maui south-west shore. First we took the turtle beach for some snorkeling and after that we drove further to the Big Beach.

We expected to see several turtles but in stead we only saw one huge one underneath a rock of coral when we were snorkeling. Those animals I think are the inventors of “hang loose”. Beautiful to see this huge thing just hanging out there.

After that we drove on to the Big Beach. One of Maui’s main beaches. We understand why. Great sand, view, water, vie, everything..

Third day, 4th of june: Road to Hana
The Road to Hana probably is Maui’s biggest tourist attraction. A 40 mile road along the coastline of Maui crossing numerous waterfalls.. At least, if it has been raining lately which didn’t was the case. I guess that’s one of those thing we experience when we go on holiday. Couple of years ago when we were in Yosemite at was dry also and those big waterfalls over there also were nothing more than a few drops of water gliding off some rocks.

We’re not here in high season so the good thing was that there wasn’t much traffic on the road and that is also quite unique on this road. We started early in the morning and our first stop was Hookipa beach, the no.1 surf Mekka. I imagined this much bigger, busier and wilder, but the coastguard told us that in wintertime it was and that waves could be as high as one of them palmtrees. With the amount of coralreef over there I now have much more respect for those surfers going into those pipelines. After gathering some souvenir for old surfer friend Ton, we continued our tour.

After some hiking, lots of corners and mighty sceneries we went to see a waterfall. We were quite tired already, because it was warm and we were getting in and out of the car all day. You don’t want to mis anything when you’re there, do you? There were 2 waterfalls in this area that we knew of. The first one wasn’t that impressive and at first we didn’t want to go and see the second one, because that was quite a difficult hike. We did it anyway and the reward was awesome!! We got our own waterfall with swimming pool!! No tourists here at all!! Never experienced such a thing so we went for some nice cooling off here. Definitely the best part of this day, despite all the good stuff we saw up till this point.

We made quite some pics on this trip, but they are nice ones 🙂

The last couple of days on Maui we did some cruising around the north shore of the island, visited the Iao valley and just spend some time on the beach.
Especially our visit to the Kanaha beach on the north shore i found really cool. Lots of kite-boarders and surfers doing their tricks so enough to watch at. Today (6th of june) is our last day on Maui before heading to LA. First we’re going too check out the local massage saloon to work on our muscles and after that we’re going to chill on the beach again. What a life!